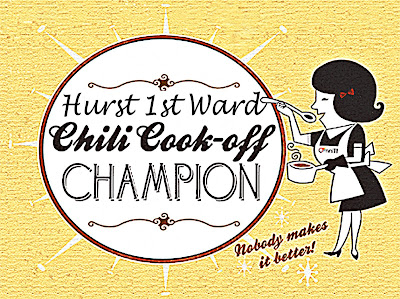 I actually didn’t even make a Chili for the cook-off on Saturday. Texans don’t appreciate a chili with beans. They like it beanless, smoky, and hot. My chili recipe is really only one of those three. So after years of trying to change their minds I made the award certificates and voting cards for the event instead! Lee unexpectedly became the MC for the night this year as well. Overall, it was a nice time. The ward we attend for Church is a little bit older, so the parties begin early, end early, and have a lot of sitting. Eventually the young families just let their kids run around like crazy and the older kids take the younger kids toys. You soon see a twelve year old on a toddler rocker and the parents seriously don’t notice. It’s hilarious. Similar to watching the Animal Channel. Survival of the fittest. Unfortunate for my children, I watch them like a hawk. I let E and V play as long as it’s deemed safe and then I quietly take them into another room until it’s clean-up time! I worry about them being taken down by the herd. They love running in the empty gymnasium with the other toddlers who have parents on clean-up duty. Next year I may try to convince my Texans to enjoy a bean Chili!