You can find magic wherever you look! Sit back and relax, all you need is a book.-Dr. Seuss

For those who celebrate the holiday religiously, the best Christmas story will always be found in Luke Chapter 2!   Many follow it up on Christmas Eve night with the traditional  ‘Twas the Night Before Christmas!    Once you get past those favorites,  there is a never-ending list of holiday books for children to enjoy.  Here are 24 children’s books to read this Christmas! 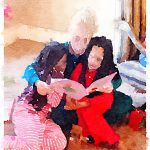 I Believe in Santa Claus
by Diane G. Adamson

The Tale of Three Trees: A Traditional Folktale
by Angela Elwell

Room for a Little One: A Christmas Tale
by Martin Waddel

The Spirit of Christmas
by Nancy Tillman

An Otis Christmas
by Loren Long

Christmas from Heaven: The True Story of the Berlin Candy Bomber
by Tom Brokaw

The Christmas Wish
by Lori Evert

The Night Before Christmas
by Charles Santore

The Jolly Postman
by Allan Ahlberg

I’ll Be Home for Christmas
by Holly Hobbie

The Best Christmas Pageant Ever
by Barbara Robinson

The Legend of the Poinsettia
by Tomie dePaola

Yes, Virginia, There Is A Santa Claus
by Francis P. Church

The Nutcracker: Press the Note to Hear Tchaikovsky’s Music (The Story Orchestra)
by Jessica Courtney-Tickle

A Wish to Be a Christmas Tree
by Colleen Monroe

I’ll Be Home for Christmas
by Holly Hobbie

How the Grinch Stole Christmas!
by Dr. Seuss

Rudolph the Red-Nosed Reindeer: The Classic Story
by Thea Feldman

The Elf on the Shelf: A Christmas Tradition
by Chanda A. Bell

The Year of the Perfect Christmas Tree: An Appalachian Story
by Gloria Houston

The Vanderbeekers of 141st Street
by Karina Yan Glaser